Work on the village hall was completed at the end of April,  just in time for us to set up Nursery ready for the beginning of term.   With help from  Amanda and Emma, we hurriedly moved all our equipment out of the storage container and into our new large store.   We have immediately benefited from  having an extra corner in the hall free for our use because we have been able to create a space for the older children to work with the more advanced Montessori materials.  The room appears brighter and lighter, which is probably at least partly because we no longer need our large screens  to “fence” off the stage, chairs and tables belonging to the village hall.  However, we now  have to carefully re-think how we are going to display project work and children’s work.  In the Autumn we are also going to look into re-placing our shelving around the room to make better use of the space.

At the start of the summer term we read “The Journey” and the children enjoyed re-enacting the story about the little boat making her journey along rivers and out to sea, using props and musical instruments. Annaliese brought  music from various different countries for us to listen to and the children enjoyed dancing and playing instruments to it. 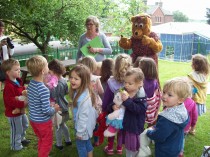 In May, we made our own journey by steam train on The Watercress Line from Alresford to Alton, stopping off at Ropley where we met Mrs Bear and helped her  find her picnic. Unfortunately, the weather was a little damp and we had to eat our picnics inside. Rain did not prevent us from walking to a nearby meadow to see the wildflowers!  Sadly, presumably because of the rain, there were no butterflies to see.

One morning in June, Kerry from Playball came to the Nursery to give us an introductory session on a variety of ball skills.  We are very much looking forward to Playball becoming a weekly event  next term.  In June, we were also practising our  races regularly for our annual Games Day 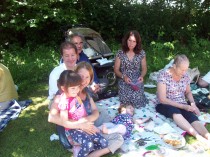 thoroughly enjoyed all the extra physical activity.  Our Games Day, which we     postponed because of rain to the first week in July, was a huge success with all the children       competing in several different races and some very exciting sprint races from the parents!  As usual, we all enjoyed a leisurely picnic afterwards.

This term, we have all very much enjoyed listening to Tim (George’s Dad) read a story most weeks before our Yoga with Roessa on 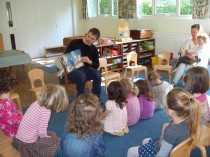 Thursdays.  In July, Felicity (Ottie’s Mum) spent a few mornings in Nursery with us to take photographs of the children.  The main purpose of which, was to produce a “leavers book” and the results are available for all to see in a my copy at Nursery.   The book is a really lovely way to remember all our 2014 leavers.

This year, we chose the theme “lest we forget” for our entries to the Horticultural Summer Show and the children made some 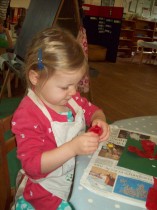 beautiful collage pictures of poppies.  The pictures were displayed in Froxfield Village Hall in August and were admired and commented on by many!  We also received a special mention for our entries, in the Petersfield Post!

Work  to renovate our raised beds began at the end of term;  several overgrown shrubs have been removed, the rotten wooden borders have been re-placed and the central wigwam re-set.   In the Autumn, Annaliese is planning to organise a group of parents to help us re-plant.   Our willow den is looking quite untidy and Merryn’s Dad has very kindly offered to sort this out for us!

We are looking forward to welcoming 9 new children and their parents to the Nursery in September and give our congratulations to Rachel and Zuzie who have both achieved level 3 in their childcare qualifications.  Rachel will be back with us but Zuzie has moved away and is hoping to find work in another Montessori Nursery.

Below are a few pictures from our day out on the Watercress Line!

Mrs Bear tells us about her lost picnic! 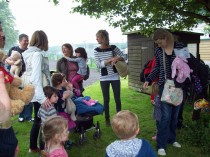 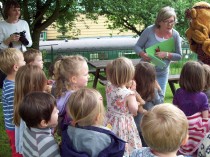 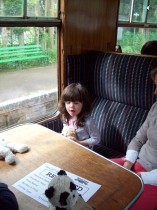 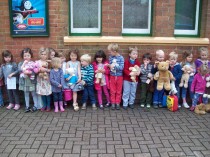 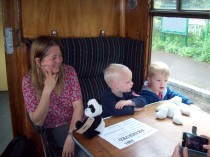 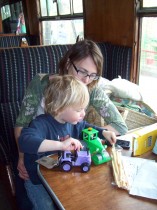 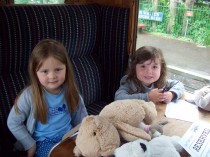 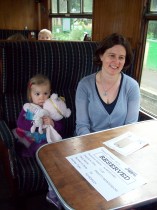 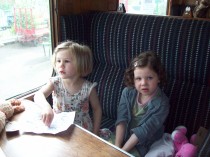 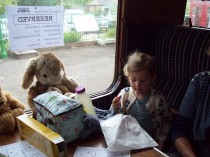 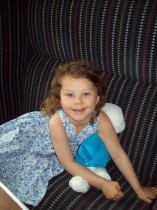 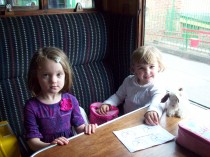 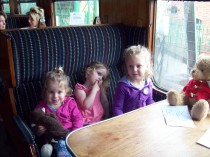 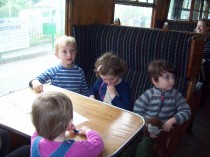 Our visit to the Watercress Line

On Thursday 22nd May Privett Village Hall was in use for polling so we took our bears (and children) on a visit to the Watercress line.

Mrs Bear tells us about her lost picnic!

had somehow managed to mislay her picnic.

We organised a search party and soon discovered her sandwiches and cake  in all sorts of odd places and  her flask, which was high up on a lamp post!

Unfortunately it had begun to rain quite heavily, so we decided to picnic indoors.  After lunch most of us went for a walk to the meadow and we got very wet!

It was soon time to get back on the train and Mrs Bear waved us off on the next part of our journey to Alton.   There was just enough time to buy some cups of much needed coffee for the Mums and Dads as well as a few treats before we were off on our way home back to Alresford.

It was a lovely day out despite the weather and Mrs Bear was a great hit! 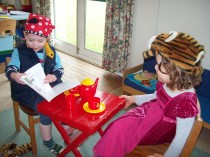 I gave the tiger some tea and read a story to her!

The wet and mild weather which continued more or less throughout the term did not dampen our spirits or us because we stayed nice and dry under the new roof! We began our project work by thinking about what we could do at Nursery and at home, to be more environmentally friendly. There was plenty of discussion about reducing the amount of paper, water and electricity we use. We talked about the amount of rubbish that goes to landfill sites or is incinerated and we were all shocked to learn that plastic takes hundreds of years to break down. The children were surprised to learn that warm fleeces can be made from old plastic and that glass can be reused to make roads. Emily told us that her family reuse their plastic bags when they go shopping and Georgina showed us a very attractive pot made from an old plastic bottle that she had brought back from Africa. 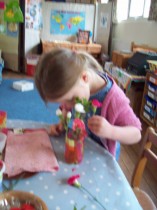 Alice arranging a posy of flowers in her vase.

This gave us an idea for a “Mother’s Day” gift. We collected small plastic bottles, cut off the tops and covered the remaining section with colourful tissue paper torn into pieces. We coated it in PVA to seal it and to give a nice varnished finish. The children arranged a small posy of flowers in their vases and presented this very attractive gift to their mums. 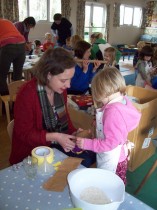 Annaliese (our music teacher) found a link to a website where people living close to a Landfill site in Paraguay are converting junk into beautiful sounding musical instruments and this inspired us to make our own instruments from cardboard junk and other bits and pieces. We asked parents to collect boxes, tubs and tubes and to come into Nursery to help the children make a musical instrument. The instruments they produced ranged from drums and rain-sticks to guitars and xylophones and the children and parents had lots of fun making and playing them .  Annaliese also taught us a couple of re-cycling songs to the tunes of Twinkle Twinkle and Incy-Wincy which she found on the internet!

In March we held a coffee morning and daffodil sale in aid of Marie Curie and we raised an amazing £188. 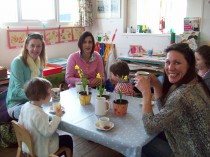 We participated in World Book Day and the children came to Nursery dressed as favourite book character.  Some of the children’s parents came and read stories too.  We read the wonderful story of “The Tiger who came to Tea” and the children enjoyed re-enacting the story for themselves.

Zoolab visited us for our Open Morning and we all enjoyed meeting and learning about some very interesting creatures including a giant snail, millipede, cockroach and Ruby the corn snake who was almost everyone’s favourite (not mine though!) 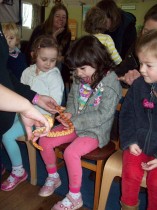 At the end of term we celebrated Easter by making an Easter Garden, telling the Easter Story and going on an Easter egg hunt. We made lovely Easter chick cards and learnt a great song (Spring Chicken) which the children really enjoyed singing and moving to. Our theme for the Spring Horticultural Show was “After the Storm” and the children used water colours to paint rainbows which looked beautiful displayed in the windows of the hall.
Building of the new storage area began at the beginning of March and we managed to move all our spare equipment and materials into a container just in time. Work is well underway and we hope it will be complete by the time we return for the new term on Monday 28th April.

During the Summer Term, we are hoping to renovate and replant our raised beds which are looking very neglected!  We are  looking forward to 3 new children and their parents joining us and to our school trip and Teddy Bear Picnic on the Watercress Line on Thursday 22nd May!

Events in February and March